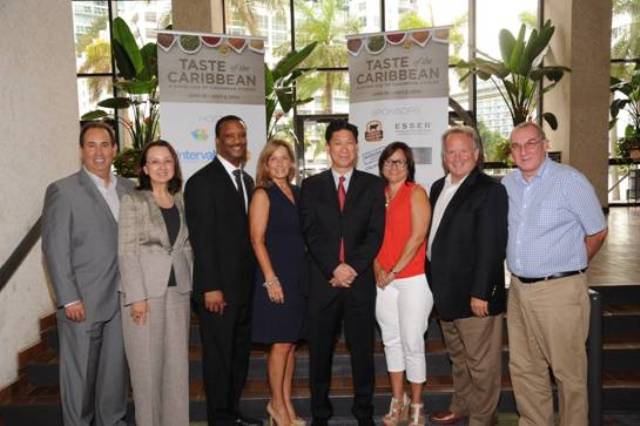 Will Oversee CHTA Affairs from Home Base at Princess Heights on St. Maarten
Emil Lee, general manager of Princess Heights Hotel, St. Maarten, takes over the reigns as president of the Caribbean Hotel & Tourism Association (CHTA) for the next two years, a volunteer position for which he was elected, and he will oversee one of the most successful regional hotel associations from his home base in St. Maarten. Lee is the first person from St. Maarten to be elected to the association’s highest post.
Lee, who is also running to become a Member of Parliament in St. Maarten in the upcoming elections, had offered to resign his new CHTA post before it started, but was asked by the CHTA Executive Board to delay his resignation pending the outcome of the August elections.
CHTA elected a new slate of officers at its Annual General Meeting (AGM), held July 1, 2014 at the Hyatt Regency Miami. The officers will be led by Lee who was sworn in as president of CHTA during the AGM. Lee and the officers will serve the membership of CHTA for the 2014-16 biennium.
The five Vice Presidents and Treasurer to serve under Lee are as follows:
· 1st Vice President Karolin Troubetzkoy, president, St. Lucia Hotel and Tourism Association and owner and executive director of Anse Chastanet and Jade Mountain Resort, St. Lucia
· 2nd Vice President Stuart Bowe, president, Bahamas Hotel and Tourism Association and senior vice president and general manager of Coral Towers at Atlantis, Paradise Island, Bahamas
· 3rd Vice President Karen Whitt, director, Turks & Caicos Hotel and Tourism Association and general manager, Regent Palms Turks & Caicos
· 4th Vice President Patricia Affonso Dass, immediate past president, Barbados Hotel & Tourism Association and general manager of Ocean Two Resort & Residences, Barbados
· 5th Vice President William “Bill” Clegg, regional vice president, Franchise Service and Programs for Choice Hotels International
· Treasurer James Hepple, president and CEO, Aruba Hotel and Tourism Association
Caribbean Hotel & Tourism Association
The Caribbean Hotel & Tourism Association (CHTA) facilitates the full potential of the Caribbean hotel and tourism industry by serving members’ needs and building partnerships in a socially responsible and sustainable manner. CHTA is the voice of the Caribbean hospitality industry for the development of the region in the highly competitive and sophisticated environment of international tourism. Today, tourism is widely recognized as a pivotal industry in the economy of the region – and CHTA functions as the common denominator for this industry in a region of diverse nationalities, languages and styles, identifying mutual problems and marshaling the resources of the active and allied members to devise solutions. CHTA represents all facets of the hospitality industry with more than 600 member hotels and over 300 allied members.
CHTA, including the events staged by the association, is supported by Strategic Partners MasterCard, Interval International, OBM International, HVS, Tambourine and TravelZoo.
For more information, visit http://www.caribbeanhotelandtourism.com. Follow CHTA on Facebook Facebook.com/CaribbeanHotelandTourismAssociation and Twitter Twitter.com/CHTAFeeds.