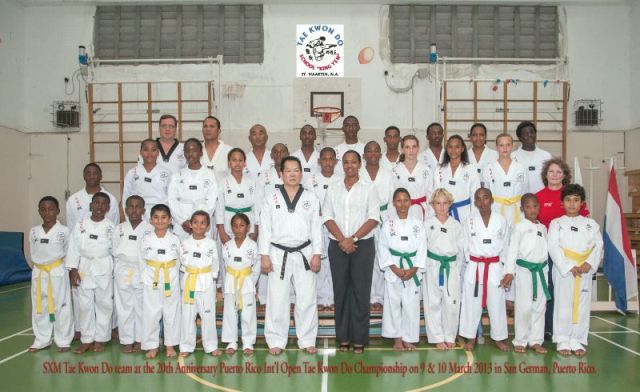 A delegation of the King Yen Tae Kown Do School left for Puerto Rico to participate in the 20th Anniversary Puerto Rico International Tae Kwon Do Open Championship March 9th and 10th 2013.

The championships were expected to attract over 700 athletes from countries and islands such as the Dominican Republic, USA, St. Croix, US Virgin Islands, Mexico, St. Barths, Brazil, Cuba, Martinique, Jamaica, Surinam, St. Thomas and Barbados.

Officials and a number of parents are also part of the delegation. The athletes traveled in special sports outfits with St. Maarten written on the back. The outfits were made possible by the sponsorship of Senior Black Belt holder attorney Jeroen Veen, Director of the law firm Lexwell.

Prior to the delegation leaving, Minister Jacobs was invited to witness the athletes in preparation for the championship. The Minister witnessed the practice and the defile. Many youngsters were already exhibiting leadership skills as they led their peers in exercises and maneuvers.

The athletes displayed discipline and respect, for which the Minister commended them. The students marched and sang the St. Maarten song as part of their preparations. Minister Jacobs was able to address the delegation and took the time to encourage them and their parents to continue to participate in sports, as well as wishing them the best as they represent St. Maarten in Puerto Rico.

They were encouraged to "Stand tall and proud while their song is being played, to do their very best and come back with as many medals as has become customary for the King Yen Tae Kwon Do students. "St. Maarten is proud of you and as long as you do your best you are already winners."