PM Clarifies points brought forward by Minister Plasterk; will stay above the tone of the letter 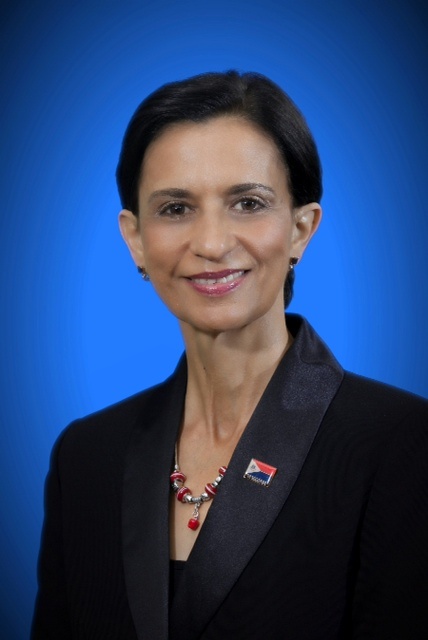 The Prime Minister of St. Maarten the Honorable Sarah Wescot-Williams clarified several points which were put forward in a letter by the Minister of Kingdom Relations Ronald Plasterk recently.

Plasterk, in his letter, instructed the Prime Minister that the Government of St. Maarten should seek to cooperate in the interest of its two sister islands on various points. In his letter sent to Wescot-Williams as the leader of the Government of St. Maarten on Friday, Plasterk urged St. Maarten to cooperate in four areas: the so-called double indirect taxation of goods that are shipped to St. Eustatius and Saba via St. Maarten, the medical emergency transportation by helicopter, the airport tax component of tickets on Winair and the landing of the fiber optic cable for Statia and Saba on St. Maarten.

The Prime Minister emphasized that Minister Plasterk was asked to provide specifics on the concerns he might have during a recent meeting held with the PM and the Council of Ministers in January, during which he could not provide any concerns. "He did not have any information from his Civil Service and we requested that specific points be outlined in a letter and that that letter should be sent to the Council of Ministers of St. Maarten. Therefore it is in that vein that I would like to read the Minister’s letter. Despite the tone of the letter and the subsequent reports which appeared in the press in the Netherlands and in other territories within the Kingdom where it reads that Minister Plasterk is calling me as Prime Minister to order where these matters are concerned, I do not want to use that same tone in my reaction. I do however want to clarify some matters and I do believe that some things need to be set straight," stated Prime Minister Wescot-Williams

"I would like to remind everyone that before there was a BES there was a SES. There was Saba, St. Eustatius and St. Maarten. What I would want to stress with that is that the relationship between these three Islands goes back much longer than there was a BES which became an integral part of the Netherlands," emphasized the PM.

The matter of so-called double indirect taxation of goods

The Hon. Wescot-Williams first clarified what the Minister called double indirect taxes for goods being transported to Saba and Statia. "St. Maarten is not levying indirect taxes and it is the Dutch Government who decided that the taxes they have generally in the Netherlands, including a General Revenue Tax, be levied on the Dutch Islands as well. That is where the so-called double taxation comes from and not in any way a taxation that happens from St. Maarten. We indicated to Minister Plasterk that our Turnover Tax is not of the same construct as a value added tax. The Turnover Tax is part of the turnover of the businesses and is calculated therein and this was made very clear to the Minister. The idea that this tax is some form of a duty that we are imposing on transport goods is simply incorrect," commented the Prime Minister. The PM emphasized that there is no holding area anywhere on St. Maarten where goods come from wherever in the world to be transported directly to Saba and to Statia and that the turnover tax is being levied by businesses here indiscriminate of who purchases the goods that are subject to turnover tax. "We indicated to the Minister that this is not something the Government of St. Maarten does not want to look at, but it is more complicated than just saying that we are imposing a duty on the items which are bought by Saba and Statia on St. Maarten and taken to the islands. We also ask ourselves why then must that tax levied by the Dutch tax system on Saba and Statia indiscriminately. That would also be a relevant question in this case," stressed the PM.

With Regards to the issue of the Medical Transportation Helicopter the Prime Minister stated that Government still has not gotten a firm hold on that particular issue and the problems that are apparently faced by the referred to helicopter in providing the so-called medevac service to Saba and St. Eustatius. "We are still looking at why the information is being sketched in the way that it is by the Minister and who in fact the responsible party really is in a case like this."

The PM stressed that she clearly informed Minister Plasterk that the flights to Saba and Statia had been carried out at a loss for a very long period of time and that the former Antillean government subsidized the flights so that the tariffs remained at a certain level. "You all will recall that the Antillean Government committed to the subsidy but did not carry it out and so, with the constitutional change of 10-10-10, the Government of St. Maarten and Winair needed to engage in a recuperation of Winair itself in order to have Winair to be where it is today. To have the Minister suggest in his letter that basically because that happened and because Winair now has its head above water we have to reduce the tariffs of the airline. Firstly, and I clearly explained this to the Minister, the Dutch Government is a shareholder in Winair and are represented on the Board of Winair and have been part and parcel to the reorganization of Winair. Again the Government of St. Maarten has never stated to the Minister or any Dutch Authority for that matter that we are not willing to talk but it cannot be so that the Dutch Government tells us that it is not a matter for Governments to discuss," continued Prime Minister Wescot-Williams.

The Prime Minister clarified that indeed the request has been made for an additional fiber optic cable to land on St. Maarten during the recent meeting with Minister Plasterk and that there was a court instruction to the Government of St. Maarten to give information on the request; "Before we answered we awaited information on the technical aspects of the placement of a fiber optic cable such as Environmental Impact Assessments and other technical matters. Again the Government of St. Maarten explained to Minister Plasterk our feeling with regards to having the type of competition which would be allowed when a new fiber optic cable comes in to the determent of companies, in particular TELEM. The tone set by Minister Plasterk is that on St. Maarten we are not allowed to have objections as a country. Of course we will. In this case we hear from the Dutch Government that this is a business venture which takes place and has no implications for Government; absolutely not! If the Minister cannot sit down and discuss the alternatives which we both have worked on to really make this a win-win situation for all parties than we have to play along the formal way in which they get an answer based on the request for the landing of this cable. We already have a fiber optic cable managed by TELEM with which we have made a lot of progress in its management and to have an additional cable come to St. Maarten without discussing the connectivity to that cable would not be in the interest of the People of St. Maarten," stressed the Prime Minister.

Another issue that was clarified, which the Prime Minister stressed is quite important for matters such as those occurring recently, was the establishment of an Arbitrary body which would provide independent advice on Kingdom matters. "If the Netherlands had dealt with this in the correct manner we would have not have had to be communicating in this fashion, especially not via the media to which the Minister has made the letter public. We all agreed within the Kingdom to come with an arbitrary body that if there were differences within the Kingdom we would have an independent body looking in on the matter and giving an opinion on it. We have never heard anything regarding that particular point. Apparently to come to that arbitration the Dutch Civil Servants are back peddling on that agreement and do not feel the need to honor it. The Dutch Civil Servants are now claiming that the agreements were never made while the documentation and the resolutions are there. When I explained to the Minister that there is an agreement to come to such a body the Minister said that he was of the opinion that this was not the case. I believe that Paper is Patient and it is there for everyone to see what the conclusions were. That kind of institution, separate from the Council of State, needs to be in place and would have avoided issues like these."

The Prime Minister concluded that she read the letter by Minister Plasterk in the sense in which the forthcoming of information from the Government of St. Maarten regarding the topics that keep coming up. "We asked the Minister to put those concerns in writing but not in the kind of tone that is being conveyed in this letter and in the media. However I will stay above that tone and give the necessary explanation on those items."