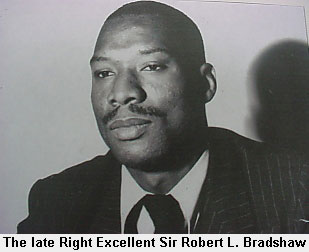 It was at 11:30 P.M. on this date in 1978 – 35 years ago that St. Kitts and Nevis Premier – Robert Llewellyn Bradshaw passed away. Less than one year late Bradshaw’s Deputy, Caleb Azariah Paul Southwell, who succeeded him died on May 18th 1979 in St. Lucia.

Although the day (May 23rd ) passed quietly, ZIZ Television in a pictorial montage celebrated the Life of Robert Llewellyn Bradshaw. Photos of Bradshaw with Antigua’s Vere Cornwall Bird and with his cabinet of ministers – C. A. Paul Southwell, Joseph N. France, Fitzroy C. Bryant, F.T. Williams, Lee Llewellyn Moore, E. St. John Payne, Ivan C. Degrase, Owen Caines and Desmond "Scratch" Ward – at a meeting in the House of Assembly were flashed across the screen. 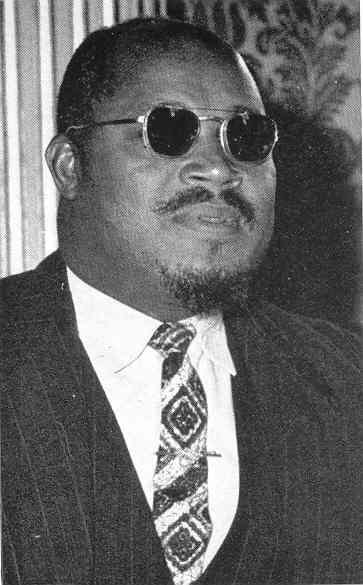 So too were the bust of Bradshaw at the Robert L. Bradshaw International Airport and the life-sized statue of the Father of Independence at the Bradshaw Memorial Park in St. Paul’s – both donated by the former Cuban President His Excellency Fidel Castro and Robert L. Bradshaw Social Security Building.

Come September 16th this year, Bradshaw would have been 97 years, while Southwell 100 years on July 18th .

Robert Llewellyn Bradshaw was born on the 16th September 1916 in St. Paul’s. His mother, Mary Jane Francis was a domestic servant, his father William Bradshaw was a blacksmith who migrated to the U.S.A when he was only nine (9) months old. Young Robert was brought up by his grandmother who ensured that he behaved himself and went to school. The family was far from being wealthy, there was no luxury but food was plentiful and fresh.

By age 16, Robert had attained three Seven Standard Certificates and had even taught as a pupil teacher for a short while before he went to Basseterre where he became a machine apprentice at the Sugar Factory. His mother was then caretaker of the guest house at the Factory and Young Robert moved in with her and got a glimpse of life at the managerial level. In the machine shop, Adam Claxton, a welder, suggested that the young man should join the Workers’ League.

His membership was seconded by Harry Audain. However, his career as a machinist did not have a chance to take off when an accident in the machine shop Bradshaw injured his right hand and the doctors were unable to restore its full use. Bradshaw stayed in the tool room of the machine shop where he earned 2/3 per day but he also turned his attention to more academic pursuits. His mother paid for a correspondence course from England and two boys from the Grammar School who worked in the Factory Laboratory helped him with his studies.

1940 marked a turning point in Bradshaw’s involvement in the union. A strike for higher wages cost him his job and he was taken on at the Union as a clerk. Bradshaw also became the first secretary of the Sugar Factory Section of the Union and a member of the Executive Committee. In 1944, following Sebastian’s death, Bradshaw became Union President and vice-president of the Workers’ League and four years later the Union through the throes of the Thirteen Weeks Strike. The strike sparked off a Commission of Inquiry into the organisation of the sugar industry and Bradshaw was appointed to it. He visited England that same year in connection with the Commission’s report.

Bradshaw’s activities were not, however, limited to the local scene. In 1945 he took part in the establishment of the Caribbean Congress of Labour and was elected its first assistant secretary. In 1947 he represented St. Kitts-Nevis-Anguilla at the "Closer Union" Conference for the amalgamation of the Windward and Leeward Islands and at the Montego Bay Conference which discussed the Federation of the West Indies. Two years later he participated in the establishment of the International Confederation of Free Trade Unions in Brussels and was elected to its first Executive Committee.

In the political arena, Bradshaw was elected along Joseph N. France and Maurice Davis to the island’s Legislative Council in 1946 and later became a member of the Leeward Islands General Legislative Council. He was again elected in 1952 when universal suffrage was introduced. In 1956, the advent of the ministerial system of government, Bradshaw was appointed Minister of Trade and Production.

In 1958, Bradshaw was elected to the Federal Parliament and held the position of Minister of Finance. When the Federation was dissolved in 1962, Bradshaw felt that "we were ruining the one great opportunity we had of making ourselves a recognizable grouping on a national scale in the world." He returned to St. Kitts and re-occupied a place in the local legislature.

After the elections of 1966, he was sworn in as Chief Minister and on the 27th February 1967 he became the first Premier of the Associated State of St. Kitts-Nevis-Anguilla. The granting of Statehood opened the door to secession. Anguilla chose that way immediately and threw its lot in with Great Britain. Nevis lingered on, threatening to secede at anytime but Bradshaw remained committed to a unitary state and a West Indian Federation. In January 1975, Premier Bradshaw’s government took possession, by law, of all the estate lands in St. Kitts and in December 1976, his government successfully negotiated the take-over of the St. Kitts Sugar Factory.

Premier Bradshaw had long been an advocate of independence for the State of St. Kitts, Nevis and Anguilla and when his Labour Party won all of the seats in St. Kitts in December 1975, he conducted independence talks with London in 1976 and 1977.

But by then Robert Bradshaw was a very sick man. He underwent major surgery in St. Kitts in 1976 and had to undergo another major operation in London in January 1978. He died on 23rd May 1978.

Caleb Azariah Paul Southwell (18 July 1913 – 18 May 1979) was the second Premier and first Chief Minister of Saint Kitts and Nevis in the Caribbean. He also worked as a teacher, police officer, and trade unionist.

Southwell was born in Dominica on July 18, 1913 to Joseph and Amelia Southwell. At 13 years of age, Southwell became a teacher and later joined the Leeward Islands Police Force in 1938. He served Antigua, Montserrat, Saint Kitts and Nevis, and Anguilla until he retired from the force in 1944.

First elected to the Saint Kitts-Nevis-Anguilla Legislative Council in 1952, Southwell was appointed to the Executive Council in 1955 and served as the First Minister of Communications and Works in 1956. Southwell was appointed as the first Chief Minister of Saint Kitts-Nevis-Anguilla in 1960. He was later appointed Deputy Premier and Minister of Finance, Trade, Development, Industry and Tourism in several Robert Llewellyn Bradshaw administrations from 1967-1978, and assumed the position of full Premier on the death of Bradshaw on May 23, 1978.

Southwell died of heart disease on 18 May 1979, less than one year after becoming Premier, in Castries, Saint Lucia during a meeting of the West Indies Associated States Council of Ministers at which the decision was taken to form the Organization Of eastern Caribbean Stats (OECS)