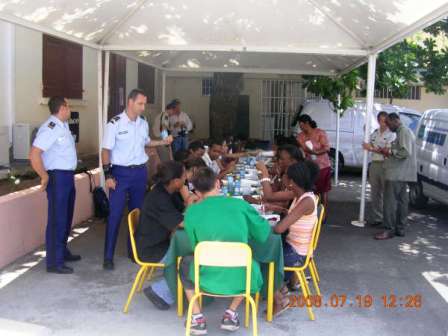 Good day Mr. Editor. We read recently that the government of St. Maarten seems to have abandoned all plans to have the Netherlands live up to the promised debt relief.

That news infuriated us. It showed the lack of creativity where it matters most by this government. Please allow us to explain. There are three basic approaches to achieving change with their own subtypes. First of all there is the "Empirical-rational Approach". The underlying assumption here is that men are not guided by greed but by reason. Subtypes are e.g. "Utopian thinking as a strategy of change" and "Basic research and sharing of knowledge through general education". The second basic approach is called the "Normative Re-educative Approach". Intelligence is social, it is an awareness and not narrowly individual. Subtypes are e.g. "Improving the problem solving capabilities of an organization" and "Fostering growth in persons who make up the organization". The last basic approach is the "Power-Coercive Approach". Power or ability is an ingredient of all human action. The differences lie in the ingredients of power upon which the strategies to change depend and the manner in which it is generated. "Power-Coercive Approaches" seek to use political and economical power to bring about the desired changes. Subtypes are e.g. "Use of Political Institutions to achieve change" and "Changing through Manipulation". A "Power-Coercive Approach "is based on fear. Fear is all we know in Sint Maarten. Haven’t we noticed that in spite of our fears life continues? Fear magnifies our inability to participate in this life fully. Has fear of being a victim ever prevented the abuser from committing his abuse? Fear is not meant to increase our skills but rather our inadequacies, shortcomings and our imbalances. The collective fear of the workers embroiled in the Pelican Saga cannot deter what has been set in motion by the powers that are. This is a prime example of politics and economics working together. "Power-Coercive Approaches" are never concerned with safety nets, it is about oblivion and even annihilation if need be. Why do you think that presently it is that difficult to determine who is a St. Maarten and who is not? It is because most of us have to fall through the cracks of this society. The cracks will be made bigger to ensure that success. For example the Tax Inspector can go back up to 15 years to levy assessments but will he also go after the 35% or more that are not paying any taxes for fifteen years? Where is the principle of equality, fairness, transparency and trustworthiness and fairplay? God be praise that everything is only for a while and death and accountability is there for us all. How come the Pelican Saga is allowed to continue despite the cry of the people? This is obvious from the energy and effort put into it to bring about the desired changes. How come similar energy and effort is not put in getting the Netherlands to pay the reminder of the agreed Debt- relief? On whose shoulder rest the burden of proof? Who is to be blamed for the fact that for many years, the government’s accounts were not audited? Country Sint Maarten has spent millions on consultancy reports and advices since its inception. How come none of these reports ever sought to bring the Debt-relief issue to a good close? Yes, the criteria was outlined in the protocol but isn’t it also true that back then the Netherlands knew or ought to have known that the government’s accounts had not been audited for the past years? Is this a case of abuse of power, undue influence or inside dealing on the part of the Netherlands when that agreement was made? Why is there a sense of unfairness and it is growing after all these years? Could this growing sense of unfairness stem from the fact that the outcome of parts of the "Final Accord" is not what we were promised? Was it the intention of the Dutch government to budget the funds but never to make payments? In spite of all the questions posed, we believe that the Dutch are honorable and reasonable. Yes the government of Sint Maarten had to prove the debts to the SOAB. Didn’t the SOAB know about the problems with the year accounts? How dedicated was the SOAB in finding a way forward to resolve this impasse? The companies and others that are owed by government, do they have audited financial statements and were unqualified reports issued? If so couldn’t steps have been undertaken to request copies of such, submit those with printouts from government’s accounts to the SOAB pending the review of government’s year accounts? The process of Debt-relief could have been kept alive in this manner. Is it true that those companies owed have to forfeit the money owed because of government’s inability to bring the Debt-relief issue to a good end? Let us hope not. "Power-Coercive Approaches" have its limitations which is clear from the above. Neither the SOAB nor the Netherlands were intimidated by Country Sint Maarten’s approach. Justice delayed is Justice denied. Could parliament ask government to look into the debt relief saga from the outlined pattern in the book "Freedom to Learn" by Carl Rogers and H. Jerome Freiberg? ISBN 0-02-403121-6.

WICSU-PSU CONSTITUON DAY REFLECTION – ARE THE WORKERS BETTER OFF TODAY THAN TEN YEARS AGO?

MP Wescot-Williams: “St. Maarten/St. Martin’s border closure has taken on an European context and should be elevated to a Kingdom level.”

UD Faction wants to know when the public meetings regarding the payment to justice workers; the “reopening” of the country and the SSRP will take place or will continue, as the case may be.