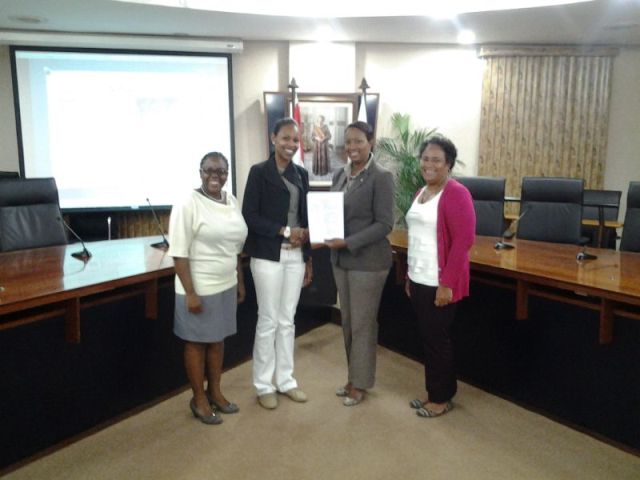 On Wednesday February 6th 2013 Choisy presented her action plan to the Minister of Education, Culture, Youth and Sports the Hon. Silveria Jacobs. On hand for the presentation were Marcellia Henry – SG UNESCO St. Maarten and culture department representative Arlena Sprott. The action plan focused on the various ways the intangible cultural heritage of St. Maarten can be promoted and preserved and the necessity of these actions.

Melanie Choisy is a 22-year-old recent graduate of the University of Miami where she received double Bachelor of Arts degrees in Latin American & Caribbean Studies and International Development with a minor in Spanish. Majoring in these subjects has allowed Melanie to be very knowledgeable of numerous cultures, languages, and institutions, especially those particular to the Latin American and Caribbean region.

During her last two years in Miami, she interned for Diaspora Vibe Cultural Arts Incubator, a local Miami 501(c)(3) organization that offers support and exhibition opportunities for Emerging Artists of the Latin American and Caribbean Diaspora.

Minister Jacobs expressed her delight in knowing that Melanie has returned to the island after her studies and is so invested in ‘spreading the word’ among her peers and encouraging youth involvement in St. Maarten’s Cultural Heritage. Her return to the island can be seen as a great asset in promoting and preserving the islands cultural heritage.

In addition much of the topics she touched on in her presentation are in line with the Ministries’ ideas to set a 10-year cultural program ""2013-2023, The Decade of Revitalizing our Natural and Cultural Heritage" in motion.

The Ministry is currently in process of gathering the relevant stakeholders, most who have already been invested in upholding, promoting and preserving the cultural heritage, to set the 10-year program. Minister Jacobs encouraged Choisy to continue the very important work that she has been doing.

Javier Silvania: “one percent of taxes paid in cash”