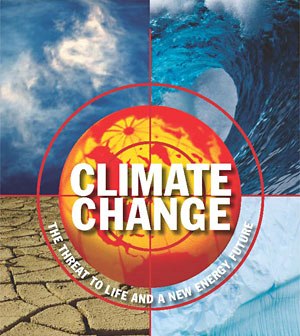 Climate change: refers to the long-term shift in overall weather conditions over a period of time. Within this century, significant changes are expected. The change in climate has to do with human activities. Scientists are very concerned, because climate change will have significant implications on the natural environment and on our daily lives. There is no longer any serious doubt that climate change is taking place, as there is a wealth of science supporting the conclusion that humans are causing climate change.

In its Fourth Assessment Report released in 2007 – five years ago – the Intergovernmental Panel on Climate Change, an international scientific body, concluded with "greater than 90 per cent confidence" that global warming is due to human activities. Some of these activities include the burning of fossil fuels in power stations like GEBE for electricity, the use of petrol and diesel in trucks, busses and cars and deforestation.

The type of impact varies per country. The warming of the earth changes weather patterns, increasing the severity and frequency of extreme weather events such as floods, droughts and hurricanes. Higher temperatures causes the ice caps in the North and South poles to melt which results in an increase in sea-levels around the globe, therefore threatening low-lying areas. Other impacts will be on the natural habitats of animals and plant species, and effects on food crop production.

Countries have noticed trends in their local weather, which are consistent with global observations of climate change. Some experiences have been warmer weather conditions; the sea level has also increased; more heavy rainfall over short periods; increased food prices when countries which we import food from experience intense storms or prolonged droughts.

Sint Maarten is not immune to climate change. It is very much a concern to us and the wider Caribbean region.

Considerable steps are being taken within the region on various fronts. The Third Caribbean Sustainable Energy Forum and Exhibition was held last week in St. Kitts & Nevis. It was held under the theme: "Advancing Energy Integration and Energy Access through Renewable Energy and Energy Efficiency in CARICOM."

The forum looked at the critical role of the Region’s abundant renewable energy resources in facilitating energy integration in the Caribbean and access to clean energy. The burning of fossil fuels is a clear example as mentioned before as one of the contributing factors to climate change.

The Caribbean Community (CARICOM) forum was held against the backdrop of the Region’s continued search for adequate response to the major energy sector challenges and national development challenges for most Caribbean countries, with respect to the issue of the lack of energy security reflected in lack of affordability of energy linked to their over dependence on imported petroleum and its derivatives; and for all countries, the matter of lack of energy sustainability in the context of the climate change challenge.

Isn’t it about time that climate change within the Kingdom should become a Kingdom discussion point? The Netherlands has already made considerable inroads within this area. For Sint Maarten, I haven’t heard anything, and I am not able to say too much about Aruba and Curacao and the Dutch public entities known as the BES islands.

It was stated a few months ago that the Prime Ministers in the Caribbean part of the Kingdom (Aruba, Curacao and Sint Maarten) will be meeting next month to discuss areas of cooperation and ways in which they can work together. Work groups have already been established and were preparing relevant proposals in preparation for the October 26 meeting referred to as the Arikok meeting.

The three Prime Ministers should add the discussion point of climate change to their agenda. It has been considered one of the most important and pressing challenges facing the international community of nations, and is one of the key issues of the 21st century where no country in the world big or small is immune.