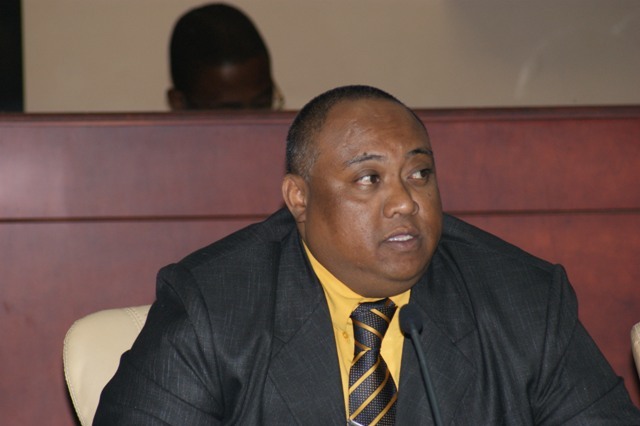 Let me first of all take this opportunity to thank all of the employees who assisted one way or the other with the compilation of the draft budget 2012. The Secretary Generals, the Controllers, the Concern Controller, the department of Financial Policies and budget which is headed by Ms. Marcella Wigley, also in that department Mrs. Catherine Connor Arrindell, Mr. Emilio Kalmera, Ms. Julisa Frans and Ms. Diahenn van Heynigen. These professionals are the architects of the budget and have worked tirelessly to bring the draft budget submitted by the Ministries in line with the accountability ordinance and the Kingdom Law on Financial Supervision Curacao and Sint Maarten. And last but definitely not least the members of my cabinet Mr. Jarl Maduro, Mr. Cleveland Beresford and Mr. Dwayne President

On behalf of the Council of Ministers I present to you the draft budget 2012.

In this presentation I will give you an overview of the main items in the budget 2012, I will also give a brief introduction to the budget process and the budget cycle 2012 to date. Then I will go over the main budget criteria, the specifications of income and operating expenses as well as the capital expenditures the national debt and related interest expenses compared to the interest norm. At the end a short analysis of the main deviations between the 2011 budget and this 2012 budget will be given.

The completion of the 2012 budget took much more effort than originally expected. Although we had a handicap-start (late in 2011) we were committed to finalize the process before the budget year would start. Unfortunately this did not happen mainly due to "balancing issues" of the operating account. Also this year, after a full year of operating as a Country all Ministries submitted their budgets that were far exceeding the available means and this was mainly due to having experienced what is necessary to run the Country.

The budget 2012 has been prepared in accordance with the "Comptabiliteitsverordening" and the "Consensus Rijkswetgeving Financieel Toezicht Curacao en Sint Maarten". In very general terms, the criteria used are that the total of operating expenses should not exceed operating income (balanced budget), that income and expenses are estimated conservatively but realistically. In addition interest expenses should not exceed the interest norm.

Other set criteria are that the tax burden should be affordable and the quality of the public services acceptable.

Although the Ministry of Finance coordinates the budget process, it should be clear that each Ministry is responsible for its own budget. The process starts with setting the framework within which each Ministry has to budget. The total of the operating expenses of all Ministries and Parliament including Councils, should not surpass the estimated income for the year. The division of the income pie is approved by the Council of Ministers upon advice of the Minister of Finance. From this point on each Ministry will present its budget to the Ministry of Finance that will prepare the draft Country budget to be approved by the Council of Ministers, commented by the CFT and Advisory Council and approved by the Parliament after which the Governor will sign the budget into law when accompanied with positive advices by CFT and Advisory Council.

The total operating expenses for 2012 are budgeted at NAf 432.5 million (2011: 420.9 million) which means an increase compared to the budget of 2011 with NAf 11.6 million or with 2.8%. The analysis of the main increases/decreases per Ministry are being addressed further down in this presentation.

The operating income 2011 includes incidental grants. In the 2012 budget no grants are included. The main increase in income concerns extra income in income taxes (NAf 24 million). In paragraph 2.7 an overview is given of the measures taken to increase income. The measures are all aimed at increased compliance.

As required, total operating income and expenses balance (no deficit no surplus). The projected capital expenditures, including study loans, will be financed by own cash reserves, bonds to be issued and free means from depreciations material fixed assets.

GDP is expected to grow with 0.2% annually. In order to cover the increase in expenses, extra measures will be needed to be able to balance the budget. Those measures will be mainly focused on compliance. At this moment there are insufficient data to project growth, however, there are signs that the economy is picking up (occupancy rates, cruise passengers).

This schedule gives a breakdown of the budgeted other taxes for 2012 compared to actual 2011.

This schedule gives a breakdown of the main income items of levies and retributions. Concession fees represent concession fees from GEBE, Harbor and Airport compared to actual 2011.

Over the last 10 years, income from wage-tax and income tax as a percentage of GDP has been declining from 10.2% in 2002 to 8.3% in 2009. Efforts are being made to bring back the level of wage- and income taxes through actions to increase compliance. The actual income and wage tax for 2010 and 2011 amount to NAf 114 million respectively 122 million.

Slide is self explanatory. Before 10-10-10 Sint Maarten was entitled to one third of the income (revenue sharing arrangement). In 2011 (February) the rate was increased from 3% to 5% with some modifications in the law.

Profit tax collected in one year concern profits realized in the year before.

The increase in expenses of the Parliament and Councils compared to the 2011 budget is caused by an increase in personnel occupancy (NAf 2.8 million) and increases in travel expenses (NAf 0.9 million), advisory services (NAf 1 million), courses and communication

The decrease in expenses of the Ministry of Tourism, Economic Affairs, Traffic and Communication compared to the 2011 budget is caused by an increase in personnel expenses of NAf 2.2 million and a decrease of NAf. 5,7 mln in USONA/SEI funded projects included in the 2011 budget.

Capital expenditures include the cost of completion of the new Government building, the cost of infrastructural projects, including the ringroad. The total of capital expenditures of NAf 65.6 million will be financed with own available cash (NAf 23.8 million), bonds to be issued (NAf 37.3 million) and means available from depreciation material fixed assets (gewone dienst).

During 2011 the pre financing loans have been refinanced with a bond issue of 2.5%. No bonds were issued to finance the capital expenditures in 2011 as yet. The actual debt position at this moment is therefore lower than budget and the debt to GDP ratio in the range of about 23-25%.

Any changes made to the budget during the handling of the budget in Parliament means that the draft budget would have to be re-submitted to the CFt for advice. If these changes are budget neutral the process could possibly be shorter than if changes are made without considering how to cover the changes increase(s) in costs in the draft budget. This in turn would mean a longer period without an approved budget 2012.

Thank you for your attention